Watching the ebb and flow of real women’s lives have made for some of theatre’s  most surprising success stories. So what is it about their tales that gives us that extra dose of catharsis we crave?

Evita. Follows a young, ambitious, and fame-hungry Argentinean, Eva Peron, on her quest to ascend the ranks of the country’s social and political circles. Seen as a savior by most and a terror by some. Dies at 33. Crazy successful musical. 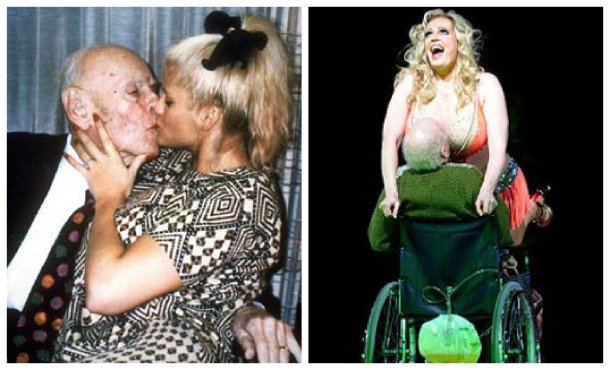 Anna Nicole: The Opera. Takes a lens to the life of Anna Nicole Smith, the waitress who became a Playboy pin-up and billionaire’s wife, before dying penniless at 39. Features extreme language, drug abuse and sexual content in the style of author Richard Thomas’ explosive and exhibitionist approach to opera.

Amy Winehouse Musical. A musical play based on the singer’s life that  will be performed by the Danish Royal Theatre in 2013. Said to focus on “the enormous pressure a sensationalist public put on a young superstar when her problems began.”Found dead at 27 in her home. Does it have what it takes to make it on stage? Is it still too fresh in people’s minds?

Yes, their lives are inherently theatrical. Eva Peron was an actress-turned-politician.  Anna’s life was a soap opera come to life. Amy’s last few years read like a tragic fairy tale. But what else draws authors to write about them and audiences to come and witness a retelling?

Perhaps, as evidenced by the public’s unending attraction to trash TV (from the early days of Jerry Springer…to more recent staples such as Toddlers in Tiaras), people like to be able to feel better about their lives in comparison to the train wrecks of others.

There is also the “gone too soon” factor, as these ladies left in the peak of their popularity or soon thereafter. This leaves us to wonder “what if” and explore the causes that led to such short lives.

Of course, some individuals’ lives are just inherently interesting. Through strokes of luck or hard work, the bullet points from their lives read like a script rather than an obit. And so onto the stage they go, to get the chance to live again.

3 thoughts on “What’s So Attractive About the Rise and Fall?”