Alice Herz-Sommer’s stellar heath at the age of 109 is not the only thing that makes her special. She is the oldest living pianist and Holocaust survivor, and arguably one of the most optimistic people you may ever meet. This touching preview for the upcoming documentary following her life,  “The Lady In Number 6,” shows how music not only saved her life in the camp, but also continues to carry her through each day after the ordeal.

The camp in which she was placed is a terrifying example of the ultimate living-theatre experiment. In 1944, the German leaders created a propaganda film and presented Theresienstadt as a model Jewish settlement to the visiting Red Cross; it was all an elaborate hoax.

The Germans “beautified” the ghetto, planting gardens and painting houses. Individuals received roles to play and the Nazis staged social and cultural events for the visiting dignitaries. Hints that all was not well included a bruise under the eye of the “mayor” of the “town.”  In the Nazi propaganda film, Theresienstadt was cynically described as a “spa town” where elderly German Jews could “retire” in safety. Once the visit was over, the Germans resumed deportations from Theresienstadt, which did not end until October 1944.

And yet still, shining examples like Alice appear, wielding hope as an impenetrable shield:

“I have lived through many wars and have lost everything many times — including my husband, my mother and my beloved son. Yet, life is beautiful, and I have so much to learn and enjoy. I have no space nor time for pessimism and hate.”

Dr. Viktor E. Frankl was psychiatrist and a concentration camp prisoner during WWII. His work, Man’s Search for Meaning, has invigorated and inspired with its tips for spiritual survival in the some of the darkest hours. His book is a testament to the power of the human spirit, with moments that capture something innate in our shared resilience:

“We who lived in concentration camps can remember the men who walked through huts, comforting others, giving away their last piece of bread. They may have been few in number, but they offer sufficient proof that everything can be taken from a man but one thing: the last of the human freedoms – to choose one’s attitude in any given set of circumstances, to choose one’s own way.”

Other wise passages include:

Happy 5th of November, all.

It is known as “The Scottish play,” “Mackers,” “The Scottish business” or “the Glamis comedy.” With a play where so few are willing to utter its name, you would think that it would remain buried under the Bard’s lesser known works. But “Macbeth” is more popular than ever, with adaptations like Sleep No More re-imagining the tale in a 6 story warehouse to Alan Cumming’s recent one-man-show, a decent into madness set in an insane asylum. And still companies are able to find new ways of telling Mac’s universal story of greed and guilt – one of which is CityShakes undeniably unsettling production here in Santa Monica. 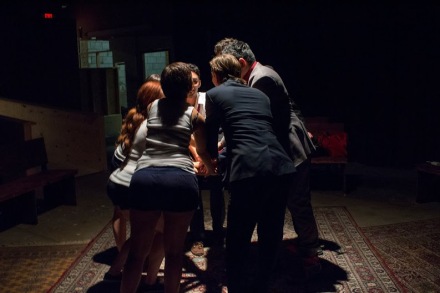 Director Brooke Bishop sets the show in the round, emphasizing the show’s ceremonial roots – from the ever-plotting witches to the individuals who ban together to unseat Macbeth from his newly-found power.  The production’s site-specific location, a storage garage behind a stark empty art gallery, also aids in the creation of an ominous air surrounding the text.

Smartly constructed with a cast of seven, perhaps the most compelling aspect of the production is the use of suggestion. Swords have bases, but no blades. Children tinker with toys offstage, but are never seen. These powerful “absences” both underline the swift decline of Macbeth’s sanity (particularly in his “Is this a dagger” soliloquy), and make Macduff’s loss all the more heartbreaking. It also featured some truly thrilling cast-made auditory soundscapes that could have highlighted other earlier moments as well.

A ceremony that shouldn’t be missed, this Macbeth breathes life into the age-old text with its crafty ways.

In honor of today’s terrorfest, it’s time to delve into the archives for some unsettling photos from decades now past.

Enjoy (or reel in horror at) these shots from  Narre Tod, Mein Spielgesell (Fool Death, My Playmate), a series of portraits of a love affair between a female model and a skeleton. The set is by eccentric photographer Franz Fiedler, 1921. 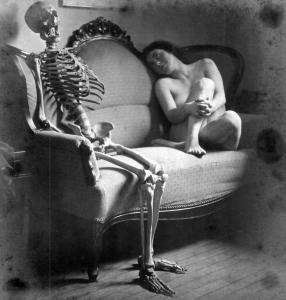 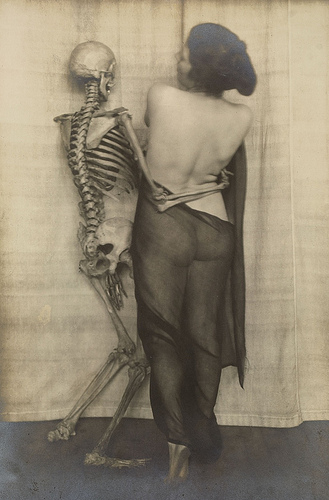 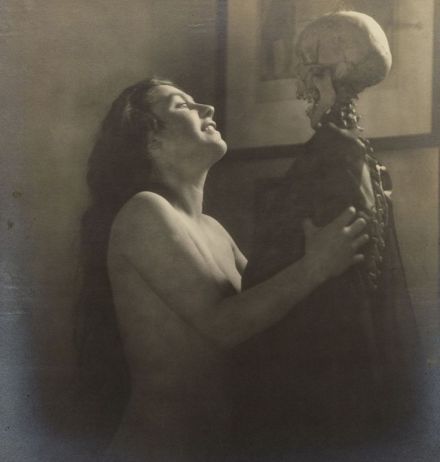 The look of love.

Remember, there are always tiny, amazing things in this life that will astound you. Let yourself get caught off guard by them everyone once in a while.

(Fun fact: most of that’s carbon, hydrogen, oxygen, and nitrogen (+99%) but we’ve also got a touch of calcium, sulfur, uranium, along with others.)

Walter White would be proud.

Remember you choose which direction to walk each day. Pick a path of which you can be proud. 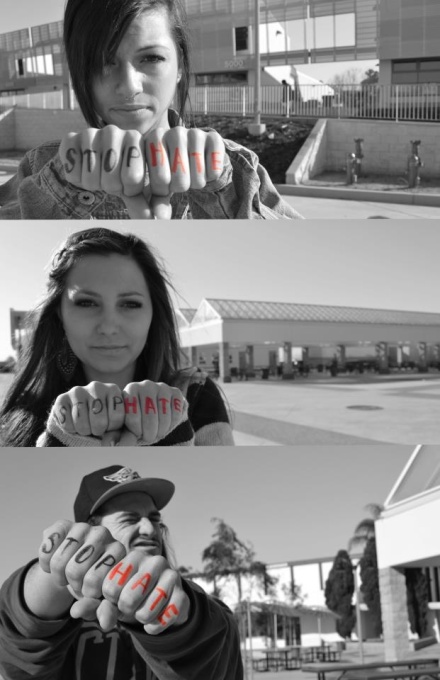 “It is what you do from now on that will either move our civilization forward a few tiny steps, or else… begin to march us steadily backward.”

A memory,
That hazardous bridge between you and the present –
The all sweeping, all-knowing now.

You remember
A quiet mind, absent of chatter,
And run towards the past to find it.

You forgot
how stillness found you in the first place:
waiting right in the place you were meant to be. 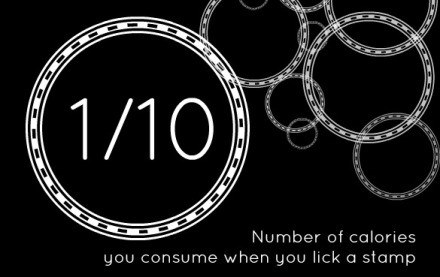 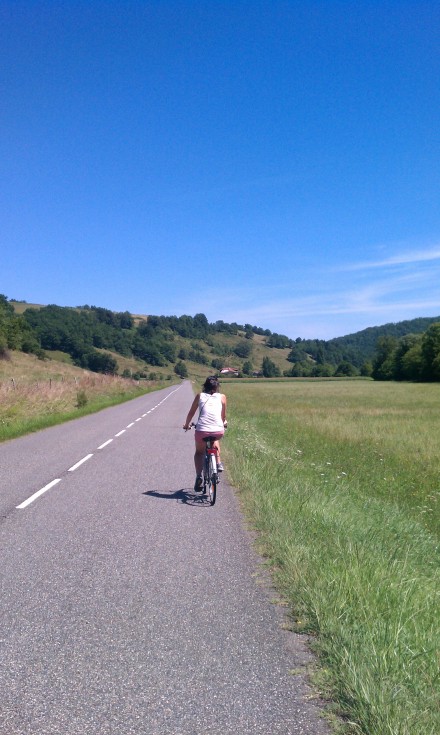 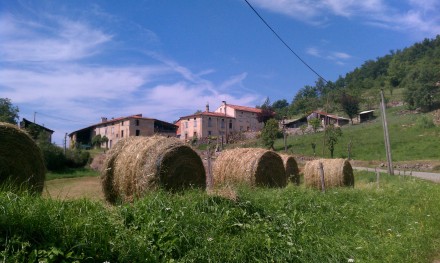 Land of hay bales, local cheese and more animals than people, this region stole away my heart. 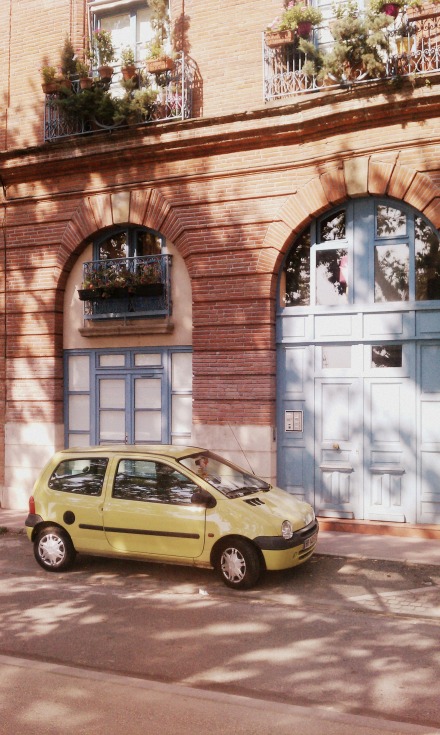 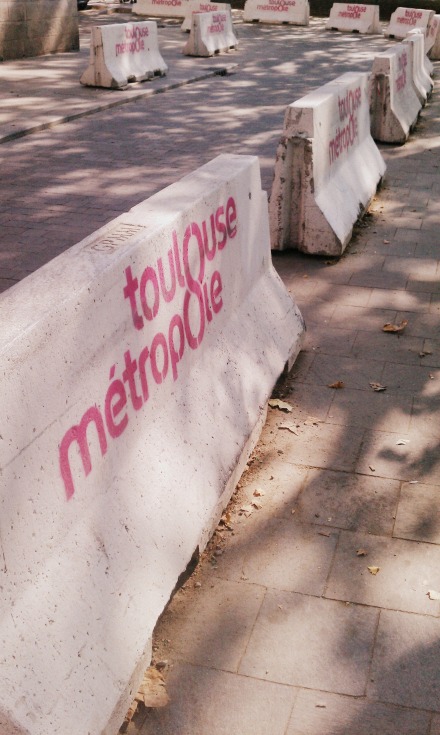 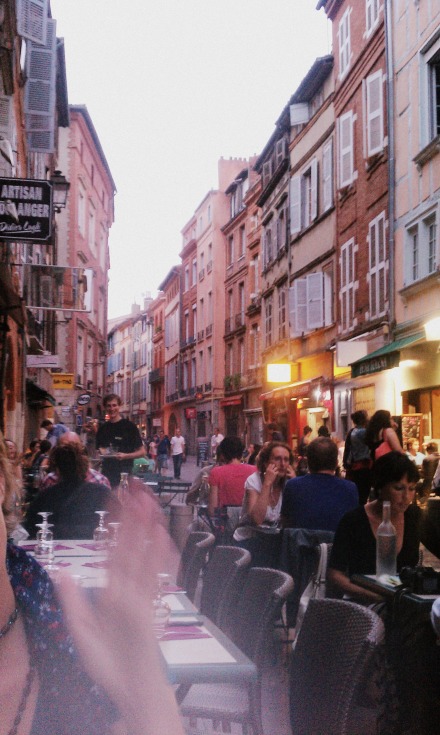 Per Tolosa totjorn mai.
Occitan for  “For Toulouse, always more”

Known as the Ville Rose (Pink City), Toulouse is aptly named for the rose-colored bricks that make up the facades of the city’s oldest buildings, even as l’ancien meets with the new.

For me, it was a city with a certain well-understood charm – a getaway for French natives in the North in search of a pause from a more pretentious Paris perhaps, or a badly needed kickstart to the everyday routine from those in the surrounding sleepier southwestern towns.

Modernity sits side by side with history as you stroll from the busy midtown walkways to duck into tiny pink cobblestoned backstreets leading towards the river. Everyone headed perpetually towards the river. The site of “Toulouse Plage” for the month (sand and beach games brought in for August), the riverside makes for a cool antidote to the August heat. I loved the outdoor markets, the streetside booksellers, the waterfront cafes, and quiet confidence of the folks there. No in-your-face-flash required, they understood well what their city has to offer. 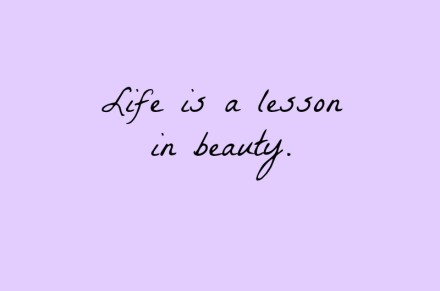 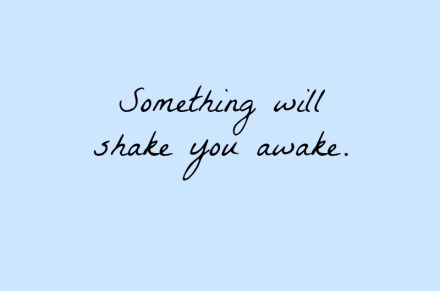